Colebrooke haulage firm to pay more than £100,000 for overtipping 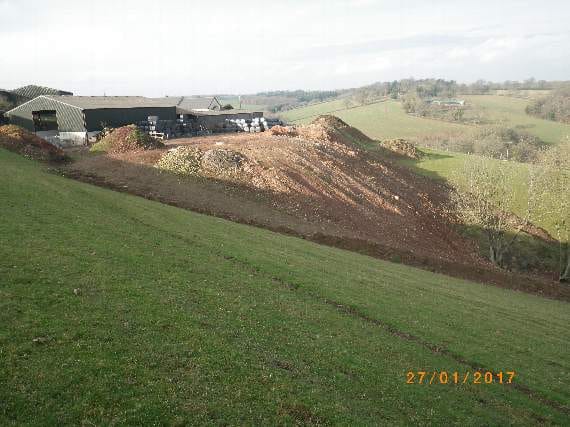 A CREDITON area haulage and site clearance company is facing a bill of more than £100,000 after it was caught dumping thousands of tonnes of soil and stone on farmland. The case was brought by the Environment Agency.

CC Haulage and Sons Ltd is a family-owned and run company based at Manor Farm, Colebrooke. The two directors are Colin Clarke and his wife, Deborah Clarke.

Farmers are allowed to accept up to 1,000 tonnes of non-hazardous waste including soil and stone under a permission known as an “exemption” that is commonly used on farms to construct hard-standings, bases for buildings and tracks and doesn’t need an environmental permit.

In November 2016 the Environment Agency visited Beech Down Farm in Tedburn St Mary where waste was being tipped in a valley.

Update: Teignmouth clear but sewage reports in Holcombe and Dawlish

Inquiries revealed that CC Haulage had deposited 7,820 tonnes of waste at the farm.

Excessive quantities of waste, much of it from building and construction sites, had also been tipped at three other Devon farms at Longdown, Exeter, Yeoford and Crediton.

The offences came to light after the Environment Agency examined waste transfer notes that identified CC Haulage as the source of the excessive amounts of waste material.

The company was said to have benefitted financially by paying the farmers less to accept the waste than it was charging its clients to take the material away.

The firm’s defence said CC Haulage believed the farmers had the necessary permits to accept the waste, but admitted the company should have checked.

“Haulage businesses must ensure they comply with the limits and conditions of environmental permits and exemptions. These are in place to stop the illegal deposit of waste, protect the environment and create a level playing field for the waste industry,” said Richard Cloke for the Environment Agency.

Judge Geoffrey Mercer also imposed a £90,000 Proceeds of Crime confiscation order at the sentencing hearing on January 15. The company must pay back this figure from the profits it made from its criminal activities.

Judge Mercer commented: “It is not entirely clear to me how the company were unclear about the limits.”

In a statement from a representative of C C Haulage it was explained that there had been confusion over limits allowable at certain sites for a variety of reasons.

The statement continued: "Differing advice had been received by the farmers. At one of the farms, the farmer had been told by an Environment Agency Officer that the limit was 5,000 tonnes, at another a different officer, had stated it was just how he liked to see waste soil being used.

"In November 2017, the Environment Agency changed their website to clarify the 5,000 and 1,000 tonnes limits on U1 tipping exemptions.

"The EA website also allows a farmer to obtain more than one licence which is misleading as only one can be held.

"All of the soil deposited was used for specific purpose, to raise levels for farm buildings, or in another case to fill a disused slurry pit for safety reasons. To-date this pit is still not completely filled as tipping was stopped.

"The figure paid was agreed before the case was heard as a commercial decision, and the judge did ask in court why we were there and not the permit holders.  The EA in their agreeing a figure do not take into account the haulage costs involved in removing waste soil, only the tipping costs.

"Moving forward, we have taken on the services of Horizon Consulting Engineers to advise on all waste movements, and two of our employees are doing a WAMITAB waste qualification.

"Our main concern is to provide security for our drivers, several of whom have young families to support."