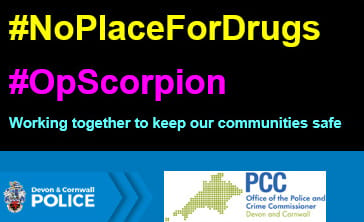 THE second phase of a regional crackdown on drugs will be taking place in Devon from today, Monday.

Copplestone knifeman jailed for threatening to ‘stab up’ police

Music in The Heart Marquee

Council leader and opposite number disagree about local reorganisation

Operation Scorpion is a joined up collaboration between the five police forces in the South West region (Avon and Somerset, Dorset, Devon and Cornwall, Gloucestershire and Wiltshire), alongside their respective offices of Police and Crime Commissioners, the British Transport Police, South West Regional Organised Crime Unit (SW ROCU) and the charity Crimestoppers to combine resources to tackle drug supply in the region and make the South West a hostile environment for drugs.

A police spokesperson said: ‘The focus of this phase is on the impact of drugs within our local communities and the intelligence police forces need from the public to help disrupt the South West drugs market, dismantle drugs supply networks and arrest those who profit from them.

The first phase of Operation Scorpion took place in March 2022 and resulted in: