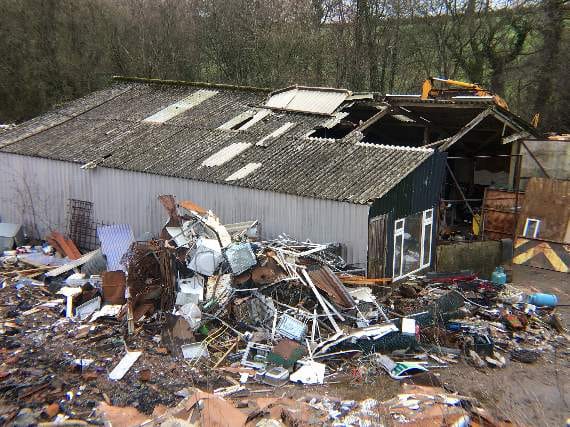 About 2,000 tons of waste was dumped by Edward Donovan at the property he rented at Spreyton.

A CREDITON man has narrowly avoided jail after he blighted Devon countryside with 2,000 tons of rubbish – then set fire to it.

The Environment Agency prosecuted waste removal tradesman Edward Donovan, of Churchill Drive, Crediton, for a range of offences after he turned part of an elderly landowners’ farm at Spreyton into an illegal waste site.

It was here he dumped waste he collected from commercial businesses across central and east Devon as EDS (Ed Donovan Services).

Donovan pleaded guilty to charges under the Environmental Protection Act at Exeter Magistrates Court, which included running a waste site on land owned by a couple in their 70s without a permit, causing pollution and setting fire to waste. He was given a jail sentence of 18 weeks, suspended for two years, and banned from the waste trade for five years.

Update: Teignmouth clear but sewage reports in Holcombe and Dawlish

He was also ordered to pay Devon and Somerset Fire and Rescue Service £1,232 - the amount it cost the service to attend a large waste fire he set at the location last year.

Donovan also has to pay £4,252 costs to the Environment Agency.

Adrian Evans, of the Environment Agency, said: "This is one of the worst incidents of illegal waste management I have come across for some time.

"The defendant showed a complete disregard for the environment, health and safety and for the owners of the land and their neighbours.

"As well as furniture, plastics, plasterboard and other vast quantities of waste which were strewn across a large area, we found materials containing asbestos."

The landowners were unaware of Donovan’s activity, who had been allowed to use the site from May 2017 in lieu of payment for dismantling and removing three caravans.

When they found out, they were horrified and their son told Donovan to tidy up the site in November 2017. Instead, the defendant set waste alight.

Adrian Evans, of the Environment Agency, said: "This case serves as an important reminder to businesses and the public to be vigilant about who they allow to remove their waste.

"Waste producers should always insist on seeing evidence that waste being removed will be taken to suitably licensed or exempt facilities to be properly disposed of or recycled."

The Environment Agency has some simple steps for all householders and businesses to think about when giving waste items to someone else to dispose of, whether the person is being paid or not:

• Check the person is a registered waste carrier.  Ideally the person should have a copy of their registration documents on them. If not, ask to see them.  You can check their licence number at: environment.data.gov.uk/public-register , or telephone 03708 506506 and The Environment Agency can check for you.

• Get a written receipt/transfer note showing their contact details, a description of your waste and details of where they are taking it.

• Note down the make, colour and registration number of the vehicle that is taking the waste away.

• If the person or firm’s quote seems too good to be true, it probably is.  Get another quote for comparison.

The Environment Agency says that taking these steps will help to deter waste criminals and reduce illegal fly-tipping and dumping that blights communities and costs thousands of pounds to clear and make safe.