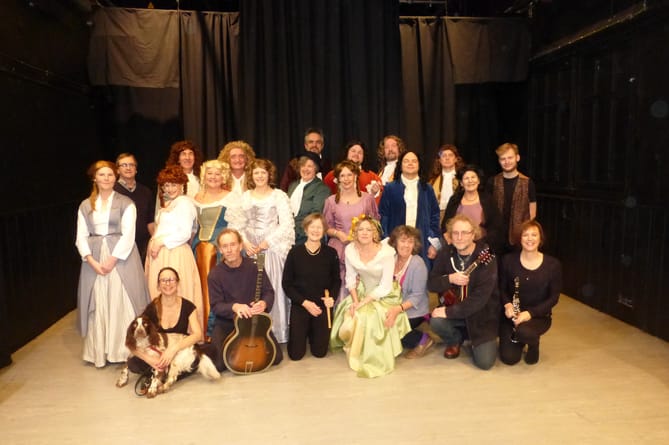 Actors from Crediton’s Brown Paper Bag Theatre Company who will tell the stages of the life of Wynfrith (Boniface) on the trails. (Photo: submitted )

LISTEN, walk and watch as the amazing story of Devon’s patron Saint and “the greatest Englishman”, St Boniface unfolds. Revealed in eight beautiful and specially designed two-metre high stained glass street-windows set around Boniface’s home town, four dates for gentle one-hour guided walks with a storyteller and actors from Crediton’s celebrated Brown Paper Bag Theatre Company, tells the stages of his life from his birth as Wynfrith in Crediton in 680 AD, his education in Exeter, his teaching near Southampton and his inspiring life-mission in what is now Germany, France and the Netherlands, where he was martyred in 754 AD.

The Boniface Heritage Guided Walks will take place on Saturdays, May 14, 21 and 28 and June 4.

Each circular walk will start at 11am from St Lawrence Green, Crediton EX17 2BD (parking nearby at St Saviour’s Way car park EX17 3JF) and finish not far away in Crediton Town Square (parking on the square and in car park EX17 2AJ), where there are also coffee shops, a bistro and a pub.

Copplestone knifeman jailed for threatening to ‘stab up’ police

Music in The Heart Marquee

Council leader and opposite number disagree about local reorganisation

The Mayor of Crediton, Cllr Liz Brookes-Hocking, will launch the first walk on May 14.

These guided walks and a Boniface celebratory event on Sunday, June 5, at 12 noon in the Town Square are organised by the Crediton Town Team and are supported by Mid Devon District Council, Crediton Town Council and Devon County Council.

Further details can be found on the Town Team website: www.creditontownteam.org.uk  including a longer life story of Boniface in English, French, German and Dutch.

Free-of-charge places on the walks can be reserved at: www.ticketsource.co.uk/creditonartscentre .

• St Boniface is the Patron Saint of Crediton.

Other events to mark the Feast Day of St Boniface in Crediton are organised annually by Crediton Parish Church and the Boniface Link Association.

This includes the long-standing tradition of prayers at the St Boniface Statue in Newcombes Meadow each year on his Feast Day.

The Roman Catholic Church in Crediton is the National Shrine to St Boniface.